It felt like a war zone. The traditions that were part of Pasto, Colombia’s New Years celebration – so quirky and charming in the daylight – had transformed into rockets, exploding body parts and burning pyres at midnight. Yes, the body parts were made of paper mache but given a Girl Scout childhood shaped by the U.S. advertising campaign of Smokey the Bear (“Only YOU can prevent forest fires”) I was certain real body parts were going to be lost that night. Also that the entire city would go up in flames. Only later did I learn that Colombia outlawed New Years fireworks in 2009 because so many children were getting injured, but this was 2012 and we were in the southwest corner of the country where word of a ban had clearly not traveled.

The peregrine son and I had arrived in Pasto on New Years Eve day after spending Christmas in Medellin and in preparation for Pasto’s five day Festival of Blacks and Whites. We knew the town also had an  Ano Viejo celebration that resembled the ones they have in Ecuador which we’d missed in our travels there.  Ano Viejo, “Old Year” gives participants the opportunity to rid themselves of anger, grudges and failures of the old year before welcoming in the new year.

Traveling from the airport into town we ran into blockades of young men dressed as women. Symbolically they represent the widows of the paper mache effigies which will explode at midnight. They asked for coins to let us pass, part of the good-natured buildup to the evening’s celebration.

Traditionally each family creates a life-sized paper mache doll called a taitapuro or carrancho the day after Christmas and displays it outside their house until New Years Eve. Some families pose the effigy on their car and drive it around on New Years Eve Day. As midnight approaches the family recites the grievances of the past year and at midnight they burn the effigy.

Commerce and media have influenced the celebration and now there are entire markets of paper mache dolls. You can buy a whole doll or body parts to make your own. You can also now buy dolls that look like cartoon characters, politicians and movie stars. 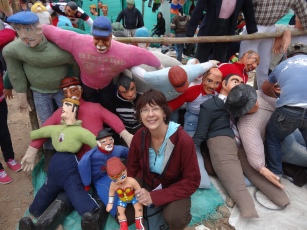 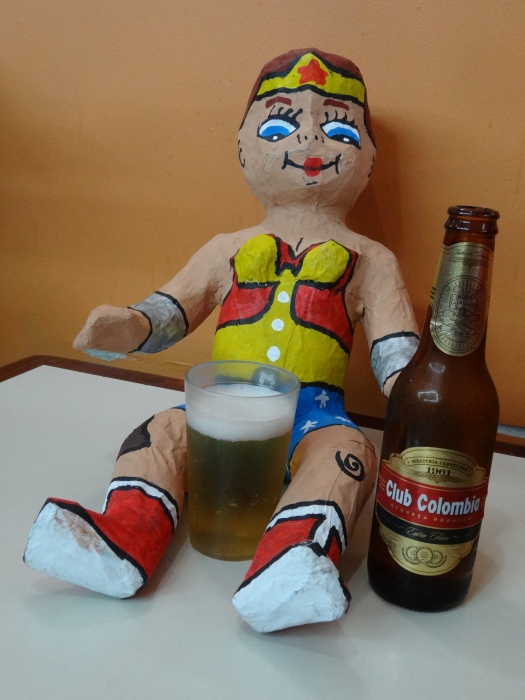 We each purchased a doll (Sponge Bob Square Pants and Wonder Woman) and then crossed the street to a cantina and bought them beer – their last meal. 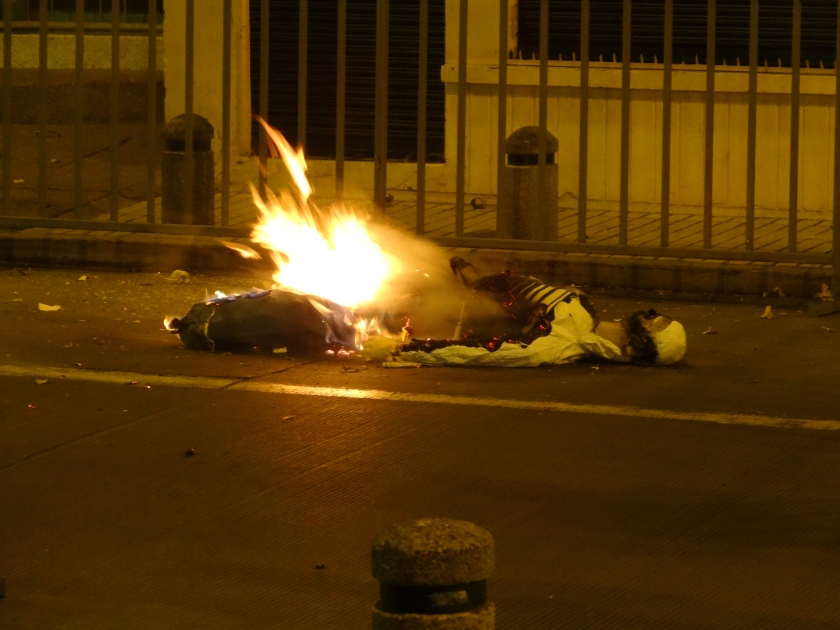 Just before midnight we walked up to the main plaza with matches to burn our doll and that’s when the street explosions began because the more boisterous celebrants put fireworks inside their effigy. Its not enough to gently burn it, it must be blown to smithereens. 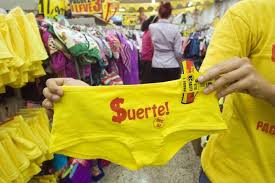 As we made our way in the dark through the funeral pyres of effigies and active blasts we were beckoned by three young women into the doorway of an apartment building for safety. And then invited upstairs to their extended family’s all night New Years celebration where we were pressed to eat food (lentil soup, a tradition that brings good luck in the New Year and 12 grapes which brings luck each month.)  And we were taught to salsa dance by the grandmother. There was much toasting of the family members and of us, as their guests…. multiple times. Somewhere in the bleary hours of the New Year I learned of another Colombian New Years tradition – wearing yellow underpants, preferably backwards. For peace and happiness in the New Year.