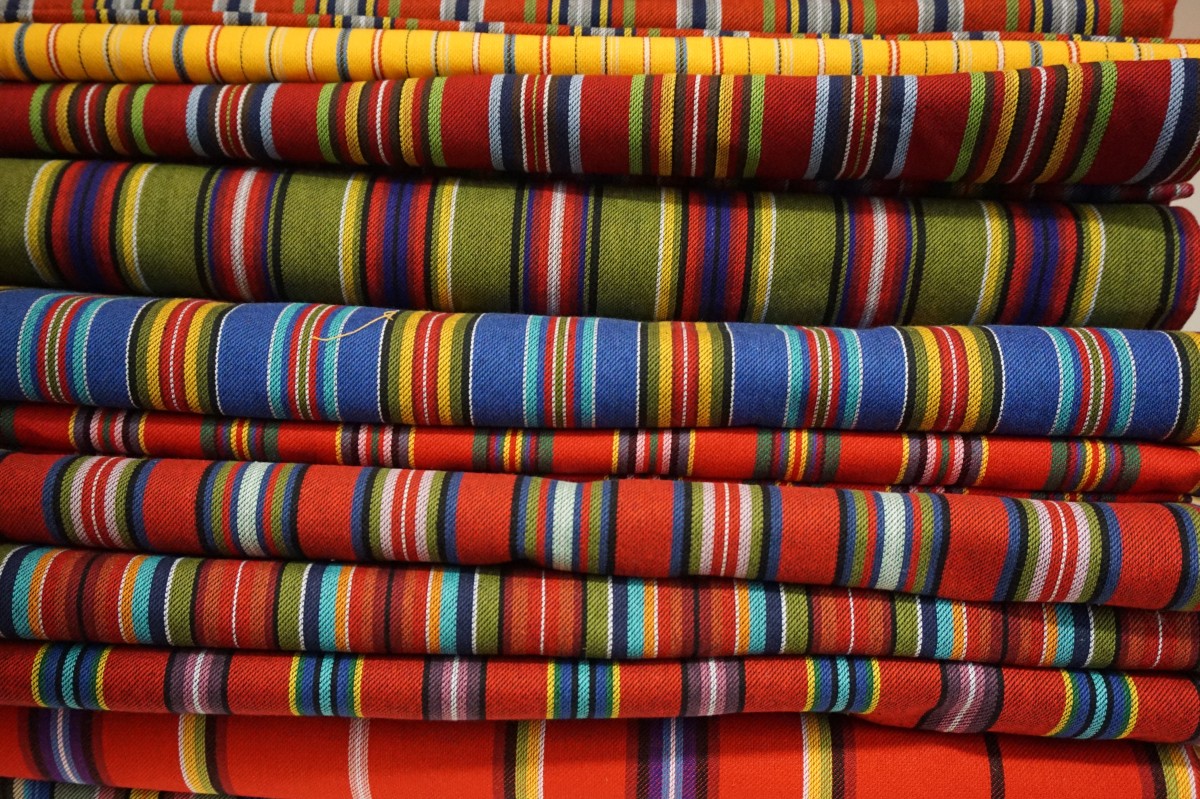 The small shops in Estonia are filled with colorful handmade textile art – colorful, knitted mittens, fine lacy shawls, vibrant striped skirts and bolts of woven cloth and fanciful, felted hats. Wandering the artists’ guilds, studios and shops in 2017, it’s hard to imagine the conditions its craftspeople endured during the country’s fifty-year Soviet occupation when all art had to be produced and sold in Soviet collectives under the restrictions of Soviet censored themes. That Estonian handicraft tradition survived the occupation is due in no small part to the persistence of its craftswomen. Check out my Global Comment story here.

Music in Estonia isn’t limited to celebrations of its strong tradition of choral music. The capitol city of Tallinn puts on Tallinn Music Week, a weeklong festival in March/April showcasing all forms of contemporary music, the arts, theatre, food and architecture using the city’s bookstores, bike shops, art galleries, bakeries, tech incubators, home decoration stores and shopping centers as venues. It’s a full-on sensory experience, an opportunity to explore Tallinn’s nooks and crannies and much of it is free to the public. Read about my experience here.

It’s intimidating enough to cross the threshold of a spa and sauna with its various treatments that include ingredients sounding more like they belong in a dessert and the vulnerability of being naked. Imagine doing it in another country where you don’t speak the language and there’s a spa menu of 149 possibilities. And it involves flailing yourself with a whisk of tree branches. The spa and sauna culture in the northern Baltic country of Estonia is a combination of Finnish and Russian spa tradition with a twist that’s uniquely Estonian. A twist so rare and embedded in culture that UNESCO designated it a global treasure. I was intrigued enough that I overcame intimidation and walked across the threshold of two historic spas in the country’s capitol of Tallinn. You can read about it here.

It was the power of choral singing that sustained the Estonian people during their fifty years behind The Iron Curtain. There are over 700 choirs in the tiny country of Estonia and from 1987 to 1991, the power of unified choir voices singing forbidden songs became a resistance tool in the country’s effort to gain independence. Check out my latest article in Global Comment.

I really dislike airport sleeping. Really dislike it. That’s not to say I haven’t been forced to catch up on much needed slumber on an airport layover. There was that time my flight landed in Singapore after midnight and I (exhausted because I don’t sleep in the cozy confines of budget coach airplanes) inadvertently wandered into the no exit, chairless holding pen for the next leg of my flight to Nepal and spent the ensuing seven hours sleeping on the cold tile floor. Alone. Clutching my backpack. Then there was the time I got kicked out of both the closed Burger King and closed McDonalds in the Beijing airport because I tried to catch some shuteye on their plastic benches during a nine hour overnight layover. And the time I missed my connection in the Istanbul airport and though it has a handy airport hotel for which I would have gladly paid their exorbitant price to lie flat on a bed, the connecting flight they re-booked me on kept getting delayed. Throughout the night, the agent regularly warned passengers to stay in the area because it could depart at any time. Nine hours of dozing while caffeinated later, I finally boarded the plane. These were not experiences I had in my supple-bodied twenties. No. They happened in my AARP subscribing years when tile floor and Burger King beds do a number on you.

That’s why I was so thrilled to find the website Sleeping In Airports.

The website shares timely information submitted by passengers organized by individual airport guides from all over the world on everything you need to know if stuck on a long layover. It also lists best and worst airports rated by actual customers. For example, about my home airport, SeaTac in Seattle it says:

I’m flying to Estonia via Amsterdam in a few weeks and was thrilled to find both the Amsterdam and the Tallin, Estonia Airports on the website’s Top Ten List of Best Airports in Europe. Tallin is #3 and Amsterdam is #9. Both airports have comfortable plush sleeping chairs and libraries and the Tallin Airport has the added bonus of announcements performed by jazz and opera singers. Imagine that. No echoing nasal voiced announcements but rather the melodious voices of vocal artists reminding me that I need to get out of my plush sleeping chair to catch my flight home.