I’d been in Valencia, Spain solo for two weeks when it struck me that I hadn’t had a full blown, uninhibited-by-the-constraints-of- my-mediocre-Spanish conversation in 14 days. I was living solo in an apartment in a city that was in the midst of Fallas, their exuberant March three weeks family and friend oriented festival which would be followed immediately by a family and friend oriented Easter. I needed to let loose a torrent of pent up English mother tongue words. But where to find English conversation in a city that speaks Valencia (a version of Catalan spoken in parts of Spain) and Spanish? I asked The Google. And then I asked The Facebook.

INTERCAMBIO EVENTS. Intercambio, which literally means exchange in Spanish are informal language and cultural events sponsored by schools, bookstores, coffee shops and pubs that allow participants to practice a language. It turned out there were many public intercambio English events in Valencia inviting English speakers to come converse over beers and coffee with Spanish speakers wanting to improve their conversational English. 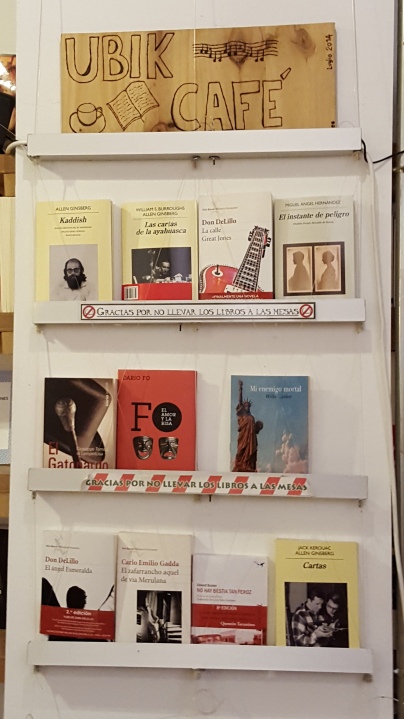 My first intercambio was at the Ubik Cafe , a coffee shop, wine bar, restaurant, bookstore in the charming Rusafa neighborhood. The evening was advertised as Singing in English and that’s exactly what it was. A local expat musician distributed sheet music of Beatles tunes and led the audience of Spanish and English speakers through a lively and social sing-along concert. On Monday evenings, Ubik sponsors a more traditional intercambio facilitated by a local language school where multiple language skills can be practiced including English, Italian, French, German and Spanish. I was unable to attend because while I was singing in English, a local told me about another intercambio venue: 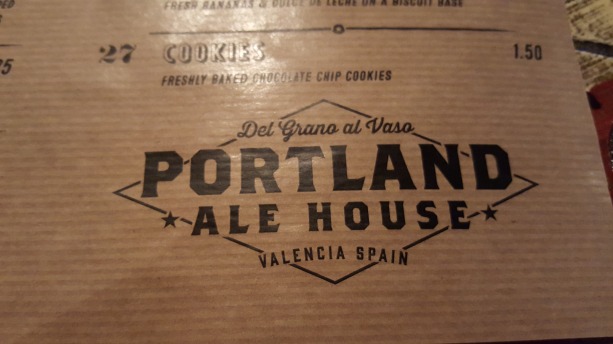 Valencia’s Portland Ale House is owned by two guys from Oregon fell who in love with Valencia and brought craft beer brewing and sensibilities to the city. The owners came from a land only three hours south of my home turf. I would not only be able to talk English, I could talk U.S.A. Pacific Northwest English! The pub was decorated in comforting memorabilia – a University of Oregon banner, Northwest Airline antique signs and black and white photos of Oregon. After the owner greeted me, I was seated at the intercambio table and given coupons for any combination of three free drinks and pizza as payment for my time as a conversation partner. I was joined by another English speaking partner (from Seattle no less!) and six locals – all young professionals wanting to practice English. The evening was a combination of informal table conversation and pub trivia contests where our intercambio table competed with the pub’s regular crowd. It was a trivia question that prompted another suggestion from one of the locals:

IRISH PUBS An Irish friend once told me you can find an Irish pub in every moderate sized city in the world. Irish pubs are generally staffed by friendly Irish bartenders, televise soccer and rugby and are frequented by English speaking tourists and expats. There are at least five Irish pubs in Valencia but I only checked out one to see if it satisfied my need for an English chat. It did. Finnegans of Dublin was conveniently located on my daily walking route back to my apartment. The second time I dropped by for a beer after exploring all day, the bartender recognized me and introduced me to a group of London tourists who were there to watch a soccer match. I joined them and two soccer games later left saturated with English conversation.

LOCAL TOUR GUIDES  The Valencia tour site Discovering Valencia offers a variety of guided tours with English speaking guides. I took the evening tapas and wine tasting tour with their lively and knowledgeable guide, Irma Mariscal and, as it turned out, another travel blogger from the U.S. That not only gave me an evening of speaking English but I also learned a lot about the protocol and culture of tapas, the history of Valencia and I discovered wonderful restaurants that I returned to during the rest of my stay.

I stayed in Valencia for a month with the intent of improving my Spanish by living there as an immersion into the language. My Spanish did improve. In fact, the rare English conversation I heard while out and about was so unusual it would nearly stop me in my tracks. By the end of my trip I thought I was hearing more English street conversation. It turned out the conversations were still in Spanish, but I understood more of it. Still, I found I needed the occasional relief of hearing and speaking unfettered English. As a solo traveler without the companionship of fellow English speakers, I needed to seek out those opportunities. And by doing that I also sang, played pub trivia, cheered a televised soccer match and sampled the cuisine and wine of Valencia.

3 thoughts on “The Urge To Speak My Mother Tongue”