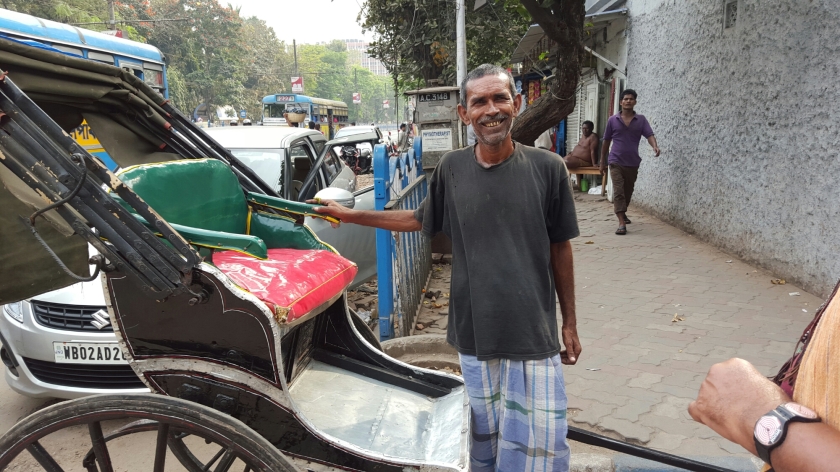 “Didi, I am not ashamed to be a wallah. You should not be ashamed to ride in my rickshaw.” I stared at the man who had introduced himself as Roju. He was thin and barefoot. I am a tall, white woman perfectly capable of walking. The idea of being pulled through the streets in his hand rickshaw felt too colonial, too awful, too politically incorrect.

Viewed as an oppressive legacy of the British Raj era of India’s history, hand rickshaws were banned by the Indian government in 2006. The wallahs in Kolkata banned together in a union called the All Bengal Rickshaw Union conducting protests and strikes to preserve the only form of work many of them felt they could do. Kolkata is the only place in the country where hand rickshaws are allowed to operate, but no licenses for new drivers have been issued since 2006 effectively phasing out the profession.

Its incredibly hard work that makes very little money for the drivers as motorized tuk tuks and pedi-cabs have taken their place. Even in the busy tourist area of Sudder Street, rickshaw drivers only earn about 120 rupees a day (the equivalent of about $2.00 USD). Most of them rent their rickshaw for 60 rupees a day so they net $1.00 USD daily to support themselves and their families. Many of them left their families in impoverished villages and sleep in the streets of Kolkata in order to send money home. Roju wanted only 50 rupees (less than a dollar) for transporting me. I’d been regularly seeing well fed tourists negotiating with pullers to take them on the same route for half that amount and then piling two of them into the rickshaw.

I relented. How could I deny Roju an income? I insisted on paying far more than he wanted to take me to work each morning during my week of volunteering in Kolkata. Gradually I learned to be less terrified as he darted through the crush of traffic madly ringing the wallah tool of the trade, a small finger bell. How anyone could hear the bell tinkling over the incessant honking of car horns was a puzzle.

On my last day Roju insisted on a tour of the warren of tiny markets in central Kolkata. We passed through the meat butchering market, the art market and the fruit and vegetable market on roads so narrow I could touch the severed goat heads. He stopped to treat me to tea with his fellow wallahs. All of them said they’d never done any other kind of work. They’re afraid of losing the only source of income they have if the government continues to discourage the profession. They also serve as the only mode of transporation the people living in India’s slums can afford.

At the end of our tour, Roju presented me with his hand bell for riding with him each day. I had learned to not be ashamed of how it all looked and to keep my eyes open during those insanely chaotic intersection crossings. He had steady work for the week paid at far more than the going rate and served as tour guide to a world I would have missed. And more importantly we had each made a friend.

3 thoughts on “India: The Rickshaw Pullers of Kolkata”