A theme is emerging in my December posts about how the Christmas holidays are celebrated elsewhere. Right below my Halloween birthday, the holiday season around Christmas ranks second on my list of favorite celebrations. Sometimes I’m home for Poulsbo’s very Scandinavian December and sometimes I like to venture further afield as I did here and here to experience the festivities elsewhere. It’s interesting how religion often shapes the most exuberantly celebrated days of the Christmas season, particularly in Catholic majority countries. In Ecuador, its Christmas Eve Day. While here at home, December 24th is filled with last minute shopping and the opening of gifts, Ecuador celebrates Christmas Eve with Pase del Nino, a religious procession from the neighborhoods to a central church or plaza in the city in honor of the birth of Jesus . The day culminates at Misa de Gallo, midnight mass or literally translated as Rooster Mass.

In Cuenca, Ecuador where I landed for a Christmas, the celebration is called Nino Viajero, “the traveler child”. It’s an all day colorful procession with 50,000 participants from Cuenca and the surrounding villages and over 200,000 spectators whose route passed the hostel we were staying in allowing a close street view of everything. Cuenca claims it is the largest Pase del Nino in all of Latin America. We (my peregrine son and I) got up early for the 10AM parade start assuming it was something akin to parades back home where people stake out spots early on the parade route. We hung out alone for a couple of hours. The crowd showed up just in advance of the procession. 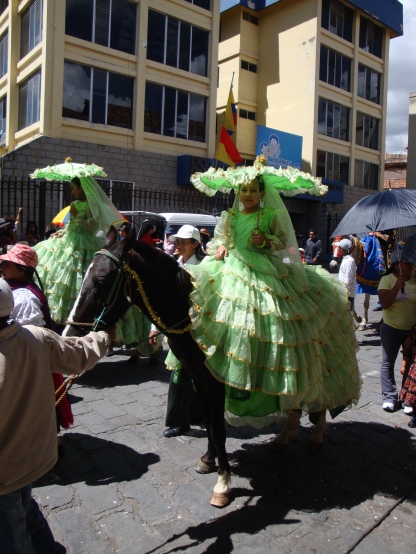 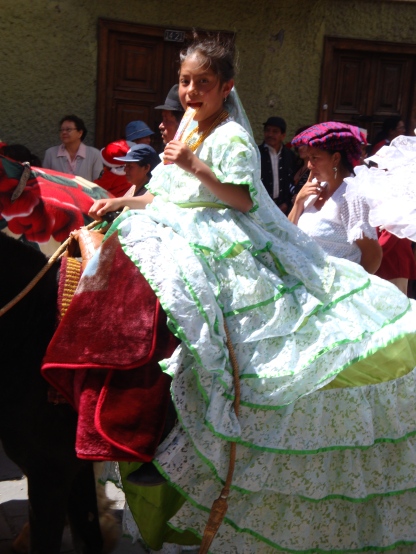 The pase had women and girls in colorful dresses and elaborate hats riding horses, often adorned in their own equine finery. 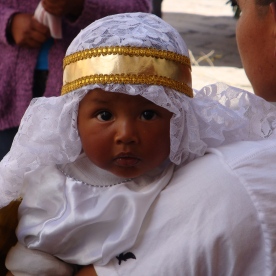 Everywhere there were beautiful children dressed as shepherds and angels, some in the procession and others watching with us on the street. 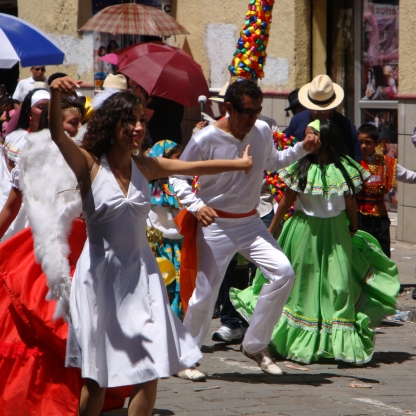 There were Santa Clauses and dancers. Also lively brass bands. The procession is a combination of Catholic and indigenous traditions and has lately been heavily influenced by media. There have been years when costumed cartoon characters are part of the parade. 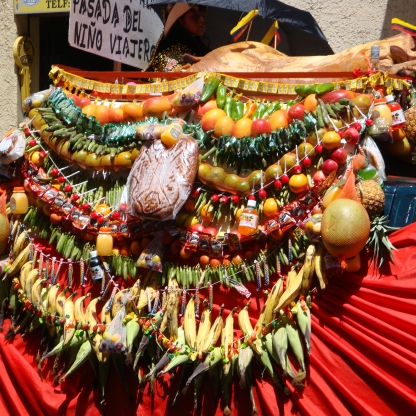 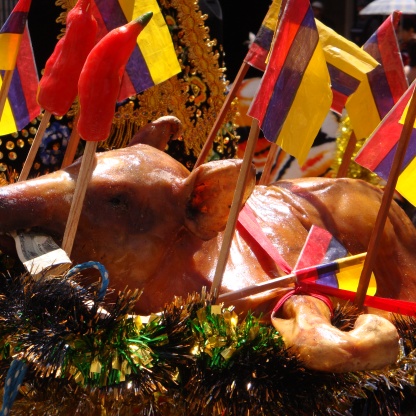 And there were food offerings – whole stuffed pigs, slabs of beef, whole roasted chickens and fruit and vegetables adorning floats.

The parade accompanies an 1823 statue of Jesus, the traveling child. Unique to Cuenca, their statue of the Christ child was taken to Bethlehem and to Rome for the blessing of the Pope in 1961 and has since been called the traveling child. The parade ends beyond a park in the central part of Cuenca late in the afternoon giving both participants and spectators a chance to go home to prepare for Rooster Mass.