“You must see it, you’ll love it.” It was amazing how many people had been to and were confident I’d be charmed by Lake Atitlan, Guatemala. People I knew before and met during the trip were convincing enough that I ventured down a narrow winding road in both mini van and tuk tuk to check it out for myself. And I was charmed – so charmed I stayed a few days longer than I’d planned in San Pedro, one of the villages surrounding the lake. 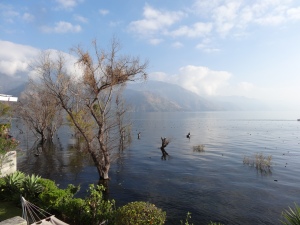 The lake is in a giant caldera formed by volcanic action about 1.8 million years ago. It’s the deepest lake in Central America and today is surrounded by three volcanos and several villages, mostly Mayan and each with its own distinct character. The area has also been discovered by expats, yoga teachers, eco-accommodation owners and out of country volunteers who work with local Mayan women and families. This area of Guatemala was heavily impacted by the 36 year 1960-96 Guatemala Civil War which left families without fathers and sons. 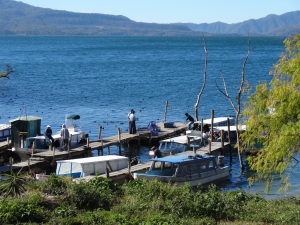 There are no roads that go completely around the lake so the easiest transportation between villages for locals and tourists alike is an army of small passenger boats that ply the waters on a schedule that depends on when the boat has enough passengers. In December, winds blew across the lake in mid-afternoon making the ride a bumpy and wet affair if sitting on side of the boat.

I decided to stay for the End of the World. December 21st was to be the apocalypse if one believed the doomsday prophets and tourist agencies capitalizing on the Mayan celebration of B’ak’tun, the end of one of the three Mayan calendars. In San Pedro on Lake Atitlan, December 21st dawned as it had every day I’d been there. The local gringo cafe was calmly serving lattes. The local Mayan fishermen were fishing. Backpackers were arriving and making their way to hostels. Nobody seemed concerned the world would be ending at midnight. No. The Mayan people were celebrating the transition from one cycle to the next of their complex calendaring system. The calendars: the Sacred Cycle which lasts 260 days, the Civil Cycle lasting 365 days and the Long Count calendar consisting of five cycles called b’ak’tuns, each lasting 1.87 million days are part of the calendar. A pik’tun is 7,885 years, a kalab’tun is 157,704 years, a k’inchiltun is 3,154,071 years and an alautun is 63 million years. 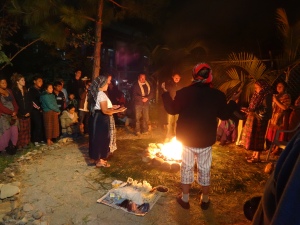 Zach decided to head to the Mayan ruins of Copan, Honduras to witness the B’ak’tun ceremony there to compare notes when we met up again. Dawn of December 21st began with a ceremony of thanksgiving on the shores of the lake. The day continued with feasting, dancing and ballgames and ended with a ceremony conducted by the local Mayan shaman welcoming the new B’ak’tun.

Having survived the apocalypse, the following day I ventured out of the caldera and back to Antigua for my flight to Medellin, Colombia – the former murder capital of the world.