….as my grandmother used to say. The do-over is done, the 30 year itch was scratched and  Palenque is no longer shrouded in the romanticized mists of my memory. From the beginning it didn’t unfold as it did back in the day. Getting there took longer. The local airport had closed and I couldn’t just get off the plane. The journey this time required a plane to Mexico City, plane to Villahermosa, bus ride to

Palenque and microbus ride to the ruins. Palenque, the town is about 10 minutes by microbus from the entrance to Palenque, the national park and both are in a jungle.

According to my bus driver, the tourist infrastructure had been vastly improved since my aborted trip, a good thing since the town was filling with Europeans and Americans arriving for a month long party.

Undeterred, my rolling suitcase, day pack and I found a one room, rustic cabana inside the national park in order to recreate what I assumed would have been the accommodation situation had I gotten off the plane 30 years ago. 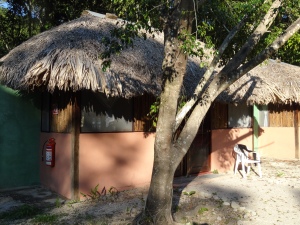 Jungles at night are noisy places. Nocturnal creatures are active. All sound is amplified. And it’s pitch black.  Sometime during my first night I was awakened by the loud grunting and growling of a jaguar outside my flimsy cabana window. Unsure of how to protect against a fierce omnivore (I’d seen the Life of Pi before leaving on the trip), I pulled the blanket over my head, huddled under it with my I-Phone that had no signal and stayed vigilantly awake the rest of the night.

The next morning I asked the owner about the prowling jaguar and he said the noise was monkeys. To be precise, it was a band of howler monkeys whose repertoire of sounds includes the  growls of large felines. They were everywhere in Palenque ruins while jaguars had not been seen for years. 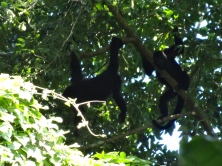 During my four days in Palenque  there was the influx of celebrants for the Rainbow Family Gathering spilling out of public buses loaded down with camping gear, musical instruments and the crumpled look of a 24 hour bus ride. I had expected their arrival. But it turned out Palenque was also in the first days of its annual celebration of the Virgin of Guadalupe, an event that includes teams of relay runners jogging the highways and streets of the town carrying a picture of the Virgin followed by decorated team relay vehicles. The combination of religious fervor and “migrating, alien nomad” fever was was undoing my contemplative do-over. I decided to  replicate another trip taken back in the day and bought a bus ticket to San Cristobal de las Casas.